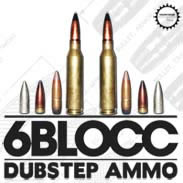 It’s time to get down and dirty as Industrial Strength invades your DAW with a new arsenal of the hottest Dubstep sounds on the planet produced by non-other than LA’s 6Blocc.

6Blocc brings an exclusive set of sounds, one shots and loops from his personal collection all in one banging license free sample pack. Dubstep Ammo features over 450 samples and contains 439 mb of pure banging Dubstep just the way you like it.

This man is known to many in the world of DnB as R.A.W. or B-Boy 3000. His reputation behind the decks is unmatched with lightning fast scratching and seamless mixing. As a producer and remixer he is leading the American Dubstep scene like no other.

6Blocc – Dubstep Ammo is available to purchase from Loopmasters for £23.95 GBP.