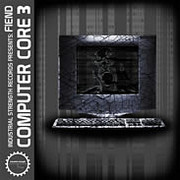 Industrial Strength Records has released Fiend – Computer Core 3, a new sample library loaded up with nasty drones, low fi drums, and a collection of twist breaks for you to mash up in your production work.

Computer Core 3 can be used in Industrial, Techno, Grime, Dubstep , Ebm, DnB Experimental and Hardcore music. The effects in the pack are wicked for video games This versatile collection delivers a slew of sounds for the strong minded producer looking to take it up a notch.

This 24 Bit pack is loaded with Apple, Rex 2 and Acid loops to rock in any DAW. Computer Core 3 also includes all the one shots in Battery 3, Kontakt and of course NI Macshine formats for total control while using these great Native Instruments plug ins.

It don’t stop there, Fiend put together a dope Reason Refill which we included in the pack. The Refill contains Combiner patches, Redrum, Rex2, and some cool NN-XT goodies for you to create the core with totally control of each sample.

Fiend – Computer Core 3 is available from Loopmasters for £19.95 GBP.