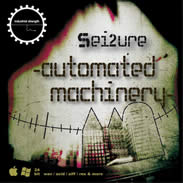 From the heart of The Hague, Hardcore/Industrial heavy-hitter Sei2ure shapes raw, mechanical realms, threading captivating patterns with utter chaos. Automated Machinery is maxed out with more than 800mb of shattering sounds that reflect this ambitious producer, DJ, performer, and sound designer’s most cutting-edge creations. You’ll hear an onslaught of twisted loops, distorted kick drums, sharp percussion shots, and thunderous effects to mangle at will.

In 2008, Se2ure’s “Rocket Fuel,” broke through to industrial parties worldwide. His tracks have made waves on Enzyme, Genosha 175, Noisj, Symp.tom, and Industrial Strength. Sei2ure has collaborated with DJ Ruffneck and The Outside Agency, as well as proffered serious remixes for Endymion, Rob Stocker, Dub Strangers, and Ophidian. Live and in the studio, he is a frequent partner in crime with DJ Synapse.

Now, Sei2ure and ISR team up to blast the stratosphere. An army of 24-bit, 44.1-kHz samples is standing by with limitless ammunition for Acid Wav, Apple Loops, and Rex.2 ; The pack also boasts a bunch of cool kits already to go in Battery 3, Kontakt and Maschine when NI is your weapon of choice!

The sample pack is available to purchase for £19.95 GBP.