Ingo Weidner has released a free soundset for The Legend, featuring a collection of synth brass sounds for the virtual analog synthesizer by Synapse Audio. 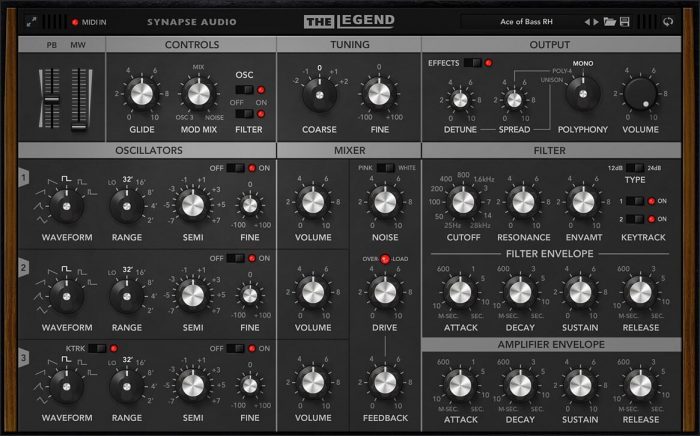 Since i owned a real Jupiter 8 back in 2004 and already before that i was a big fan of Synth Brass sounds for which several analog polysynths were quite famous for (including the Jupiter and others). Mostly I am not really speaking about replications of real acoustic Brass instruments while those area part of this too. For me this also includes Brass like pads.
The Minimoog Model D (i owned one around 2004/2005) while monophonic seemed to be used for a bunch of

So finally after my factory presets for The Legend (those with “IW” at the end of the name) already included 4 Synth Brass sounds i decided to do a lot more with The Legend, mostly using the 4 vooice polyphonic mode.
The “Classic” presets in The Legend that i had re-programmed from the Minimoog patch sheets by Klaus P. Rausch (with kind permission) includes some Brass presets too (e.g. Trumpet, Trombone etc.). Those classic patches are all monophonic but could be easily switched to poly mode.

The soundset includes 34 patches, including the 4 factory patches which are marked with “+” in the file name. Patches with “MeMo” were re-programmed from Moog Memorymoog patch sheets (included in the manual). The soundset is a work in progress so more patches and/or updates could follow.