The versatile audio recording, editing, processing, and mastering software features stereo and mono recording at high sample and bit rates, support for a wide variety of file formats, batch processing, and a wealth of signal-processing plug-ins. 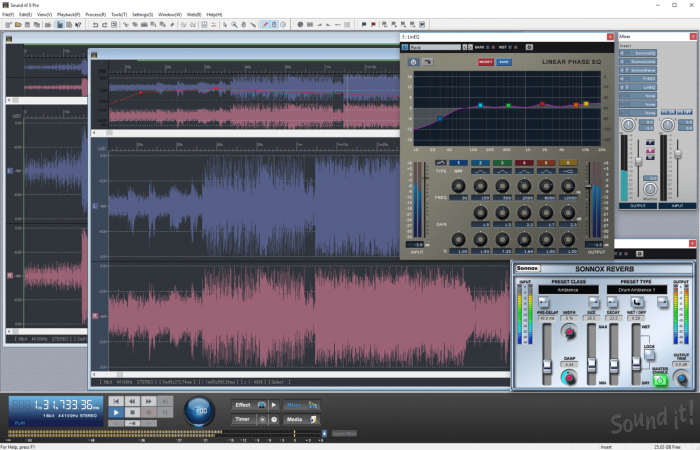 Recording is quick and easy, including support for up to 768 kHz, 32-bit PCM files, so for practical purposes, resolution is limited only by your interface. With native Direct Stream Digital (DSD) recording and playback up to 11.28/12.28 MHz (DSD256), Sound it! 8 Pro is an excellent choice for mastering for SACD. With a maximum file size of 100 GB, for up to 165 hours of 16-bit, 44.1 kHz recording, you won’t run out of recording time. The software offers timed recording with selectable preroll, insert recording between markers, and overwrite recording. A media browser makes it easy to audition sound files and instantly add them to your song via drag-and-drop. A performance monitor lets you check your CPU load and hard disk access time, and a memory monitor verifies how many files are stored and how much memory you need.

Sound it! 8 Pro’s comprehensive editing features include cut, copy, paste, trim, and merge; crossfades with selectable time and custom crossfade curves; normalize, fade, reverse phase, insert silence, and swap L/R tracks; and an undo history. You can write automation, including in real time, for volume and pan and can freeze tracks to apply effects and automation. Place and easily move markers, complete with comments, to quickly move between locations in a song or to select a precise range for playback. Play selections in several ways, including variable speed, reverse, scrub, and looped playback.

A spectrum analyzer (FFT) displays the frequency spectrum at the current cursor point during recording and playback, including peak hold, linear or logarithmic graphing, and variable magnification. Batch processing enables you to apply such tasks as gain change, normalize, fade-in/out, and file format conversion, and more to all audio files in a specified folder. Although Sound it! 8 Pro is not a MIDI sequencer, it can import Format 0 and Format 1 Standard MIDI Files and render them as audio.