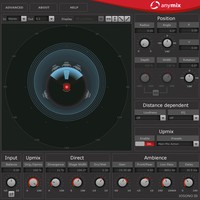 IOSONO has announced the it is offering its Anymix Pro surround mixing plug-in at a discount in celebration of its 1 year anniversary.

Anymix is the ideal solution for an easy, yet precise creation of surround mixes. It comes with a broad selection of up- and downmix preferences tailored to be used in post-production, broadcast, music and game sound design. Anymix can be used to convert any input setup from mono to 8.1 to any output format from stereo to 8.1 and vice versa.

The plug-in offers features for individual panning and high-quality upmixing. Anymix doesn’t only redistribute audio material to a certain output configuration, but gives the mixer full control over important parameters, turning the mono or stereo mix into a realistic surround scenario.

With the release of Nuendo 6, Anymix Pro has become an integral part of the digital audio workstation. A new version of the plug-in featuring support for the new Avid Pro Tools AAX format is scheduled for summer 2013.