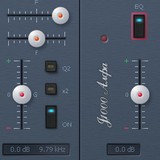 J1000 ALPHA is an equalizer made for fine tuning in post-production.

It separates stereo into mid and side signals and allows you independent equalization over both of them. Each of two sections consists of four identical peak filters.

J1000 BETA is similar in functionality to Alpha, but adapted to mixing.