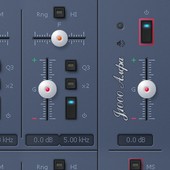 ALPHA is an equalizer made primarily for mastering and sub-mixes. It separates stereo into mid and side signals and allows you independent equalization over both of them. BETA is similar in functionality to Alpha, but adapted to mixing needs.

Changes in Alpha and Beta v3.6

Alpha and Beta are available to download as VST effect plug-ins for Windows PC.