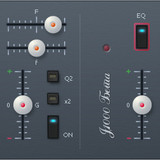 J1000 has released a series of equalizer plug-in effects for Windows.

In terms of digital sound processing these VST plugins are pretty simple and straight-forward. They don’t possess any magical properties that will make sound better just by passing through them. They don’t emulate vintage studio gear, do not produce “warm and musical analog sound” (whatever that means) and certainly won’t make you the next Phil Spector. They don’t deliberately introduce distortion of any kind, like saturation or compression, only slight phase non-linearities. They are just regular equalizers made according to my ideas how should they look like and react.

The J1000 plug-ins are available as freeware VST effects for Windows PC.