K-Devices has announced the release of the previously announced WOV and TTAP, two new audio effect plugins in VST/VST3, AU and AAX formats.

These plugins are K-Devices first in a new series of creative audio effects with DSP referred to as the Phoenix series. This new series also introduces a new GUI design philosophy to streamline the creative process and encourage experimentation beyond the original DSP intent.

WOV is the evolution of the WOV Pedal that was previously designed for the MOD Duo by MOD Devices. It is a deeply creative tool that will bring an arsenal of complex amplitude modulation features to a wide variety of source and musical styles. 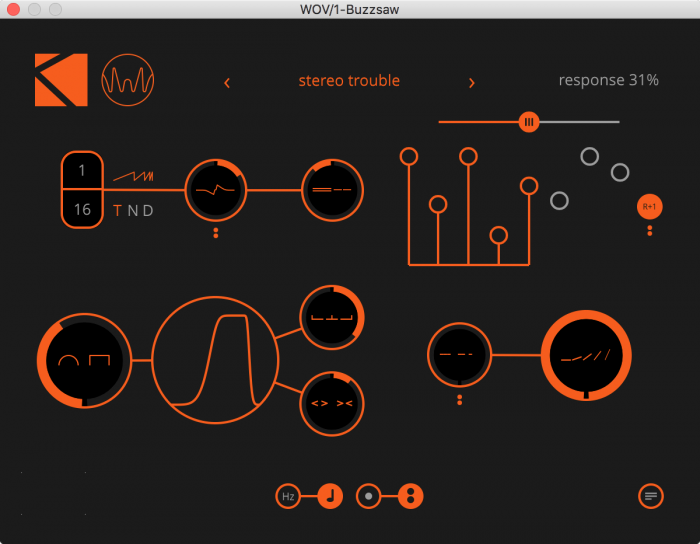 WOV started as a tremolo (and it is a great one), but it now comes with parameters to handle modulation in even more creative ways, becoming a complex texture maker, able to go from warm guitar-like tremolo modulations to quasi grains processing, to complex trance gate patterns, and more.

The Response parameter lets incoming audio increase/decrease the Modulation Rate, creating dynamic time fluctuations. The combination of the parameters Wave, Peak, and Warp, shape the modulator waveform in a flexible and easy way, giving a wide range of possible results.

Aleatory elements introduce chance into the process of creation. Silence allows the chance of getting silent modulation cycles while altering the Variation parameter introduces instability and unpredictable variations in the modulation.

TTAP is a delay effect with a set of creative features to process the delayed signal. Its unusual structure lets you easily achieve classic as well as highly unusual delay results. 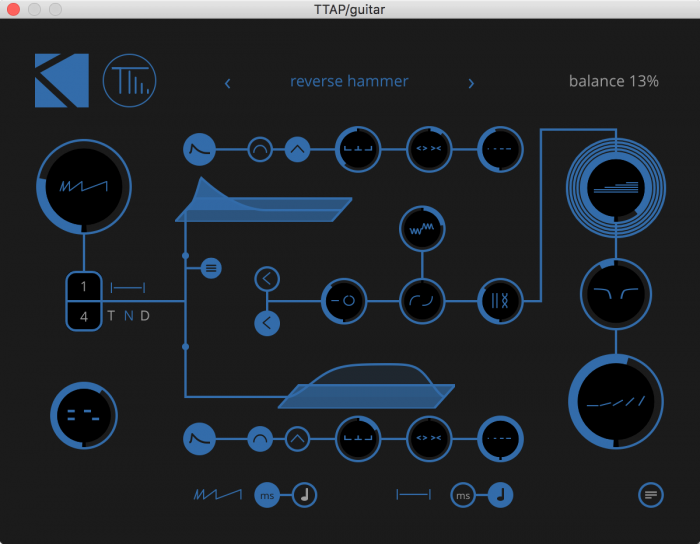 The relationship between buffers is handled by the parameters Gap and Balance. The Gap setting is an additional delay value for a second buffer, and Balance sets the amplitude ratio between the buffers. This simple but powerful combination of two features lets the user obtain delayed accents that, if reiterated through Feedback, give a reverberation of patterns far beyond the usual delay effect concept.

Besides Delay Time, a core parameter of TTAP is the time value called Section. This adjusts the time resolution that the buffers’ manipulation features are based on (amplitude envelope length, second buffer max delay, time resolution for aleatory stereo Spread and Repeat, and more). This allows all parameters to be changed simultaneously.

The Repeat parameter sets the chance to repeat the current buffer instead of overwriting it with the new incoming signal, creating semi-aleatory glitch results, up to a complete freeze effect. The Bend parameters section simulates a non-linear playhead resulting in exponential or logarithmic reading of the buffer.

With the new Phoenix series of plugins, K-Devices has introduced a new design philosophy of limiting the use of textual labels, replacing them with iconic symbols.

These symbols will be used on future effects of the Phoenix series with the hope that they will become more and more familiar to the user, like a language. A toggle at the bottom right corner lets the user replace symbols with classic textual labels if desired.

In addition, the user will not see numeric values by default. This is done to encourage using your ears as the main instrument of evaluation. Yet, precise editing and visual feedback options are available on the upper right corner of the UI. The user can see the exact value of the last selected object, and he can also edit its value, by double-clicking.

The user interface also offers an animated visual feedback for some of the key features of the effects.

WOV and TTAP are now available at the introductory price of 45 EUR each, or bundled for 69 EUR. The regular price of each plugin is 59 EUR and 99 EUR for the bundle.