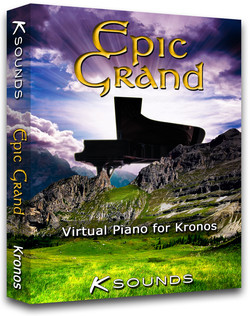 K-Sounds has announced the release of Epic Grand for the Korg Kronos and Kronos X, featuring detailed stereo samples of a Japanese grand piano.

Epic Grand was designed with quality in mind. The samples were recorded and edited at 176.4kHz, 24 / 32 bits, then converted to Kronos-compatible specifications for the final product. A close mic position was used, creating an up-front, studio sound. The stereo image is wide, centered, and mono-compatible. Every note has a generous, natural-sounding sustain.

Epic Grand’s damper resonance samples are true recordings of the sympathetic string resonance heard when notes are played with the damper pedal down. Sampling the actual resonance of a real piano provides authenticity that surpasses digital effects and convolution. This resonance is presented as an independent component of the instrument, allowing it to respond to the sustain pedal in real time. Users can adjust its volume or disable it altogether.

In addition to a variety of programs, five layer / split combinations are provided. Each one blends the piano with multiple instruments that can be independently activated and disabled during a performance. A keyboardist could begin by playing solo piano, add strings, add electric piano, and then return to solo piano – all without causing a break in the sound! Taking this concept further, additional combinations focused on solo piano allow users to independently add or subtract damper resonance, release resonance, hammer noises, and damper noises.

Epic Grand is designed to be incredibly playable. It was constantly played during its development to ensure that it responds dynamically and musically.

Epic Grand is available for purchase for $125 USD.

Leap Into The Void releases Thou Serpent Continuum for Massive