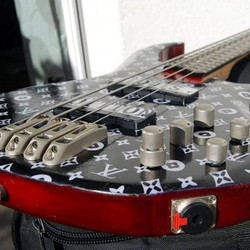 The world’s most swagged-out bass sample library. A bold claim, but D. Smolken didn’t just record, edit and map these samples – before he did any of that he also glued fake Louis Vuitton fabric to the bass.

Underneath that is an uncommon combination of modern active electronics, a long scale, and a 10-year-old set of dead flatwound strings. That makes this a great bass for hip-hop, pop and R&B, especially combined with low tuning – CGDA, an octave below cello, but the low C string is also sampled tuned down to A. 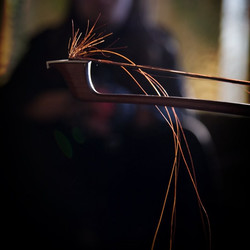 One huge solid stick of mahogany, four long and thick strings, a piezo pickup and not much more – that’s the Ergo electric upright bass we sampled. Though across its natural range the instrument is mainly a portable substitute for the acoustic double bass and the advantage of portability disappears when using samples, its simplicity and solid construction allow it to produce stable notes when tuned extremely low.

Both arco (bowed) and pizzicato (plucked) articulations are included. Arco has four velocity layers and two to four round robins per note, pizz has three velocity layers and three-four round robins. The lowest notes sampled for both are E an entire E below the E on a standard-tuned bass. Though it’s easy to create frequencies that low with synthesis or by slowing down or pitch-shifting higher-frequency samples, samples of strings or any other physical objects actually vibrating at notes this low are rare.

Sure, it can be used as a bass. The lowest notes are huge, and also useful for constructing enormous cinematic drones and thuds. They’re also great for running through all sorts of effects. The possibilities are enormous – we are offering this download less as an instrument to be used as is and more as source material for creating your own sounds.

The sample libraries are available to download at no charge.