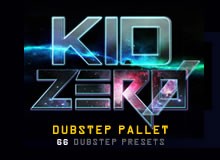 MassiveSynth has introduce the Dubstep Palette, a collection of Dubstep presets for NI Massive by Kid Zero.

Get ready for some intense dubstep action with 66 premium massive dubstep presets that will blow doors on the competition.

Instead of spending hours tweaking knobs and trying to figure out how to make a killer bass or high pitched squeal, spend your time making tracks with killer sounds that will take your production to the next level.

Each Massive preset comes with Macro controls per-assigned to make every sound as diverse as it can possibly be.

The Dubstep Pallet soundset is available to purchase for $17 USD.