Andy Baio of Waxy.org has launched a Kickstarter project for Kind of Bloop, an 8-bit tribute to Miles Davis. 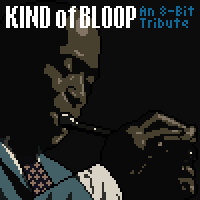 I’ve always wondered what chiptune jazz covers would sound like. What would the jazz masters sound like on a Nintendo Entertainment System? Coltrane on a C-64? Mingus on Amiga?

So I asked ast0r and sergeeo, along with three incredible chiptune artists (Virt, Shnabubula, and Disasterpeace), to collaborate on a track-by-track remake of the album. I’m raising the money to legally release the album, pay the royalties1, print a very limited run of CDs for Kickstarter backers only, and pay the artists for their hard work on these very challenging songs.