Klanghelm has released the DC1A, a free compressor effect for Windows and Mac. 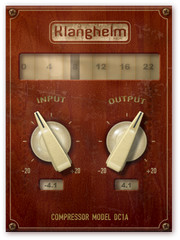 DC1A is the little brother of the compression monster DC8C. I’ve taken one of my favourite settings from DC8C and tried to make it work in a two control context. Soundwise it’s comparable to the PUNCH mode in DC8C. It’s kind of a mixture of classic opto and FET designs.

I’ve always wanted to do a compressor with just an input and output knob, a compressor that just works: gentle, faithful, from almost invisible, smooth leveling to heavy pumping with a nice crunchy saturation and punchy enough to treat drums with.

DC1A looks like a one trick pony. But don’t get fooled by lack of further controls. You may be suprised on how many different material this little thing works. DC1A is heavily program dependent, so is the saturation.

DC1A is available to download as a freeware effect plug-in for Windows and Mac (VST/AU).