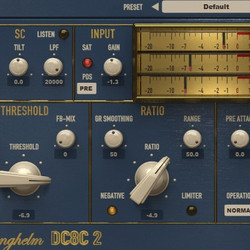 DC8C is one of the most flexible compressors around. While making a lot of different compression styles possible, it’s general nature may be described as: clear, smooth, open, distinct.

DC8C for Windows and Mac (VST/AU) is available to purchase for 20 EUR. The update is free for all existing users.