KlangLabs has released OverDubber 2, an updated version of the free delay effect plugin for Windows.

The update comes with improved internal effects and a larger GUI size. 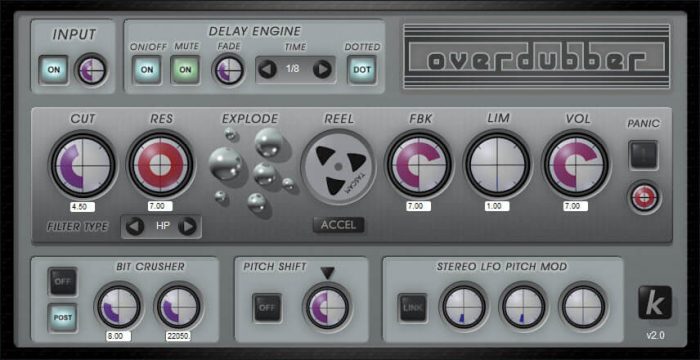 Based on it’s old brother, OverDubber is a delay FX specially tailored for morphing/distorting tails. In other works “Trippy tails”.

It’s designed to work with high gain and resonance levels with an internal limiter that will not allow the signal to go too loud. Useful on things like Dub, TripHop, DnB, also for EDM build ups when used with it’s pitch shifter.

Basically, OverDubber is a stereo delay but it has a filter, a big crusher, a pitch shifter and an automatic stereo pitch LFO in the feedback loop, quite an unusual combo. You can turn them all on, or off as desired.

OverDubber 2 is a free download for Windows (VST) at KVR Audio.

Save 35% off SONiVOX Premier Collection Crossgrade from AIEP3 Complete