QIN engine approaches sampler design with a layer of intermediary controls (called Extenders in QIN, there are 20 Extenders), helping sample developers as well as composers harnessing the advanced arrangement and manipulations of sample soundsets in a much more intuitive way without tapping into the scripting territory, yet still capable of producing complex and inspiring results.

Other than the change of sampler engine, Chinee Series QIN Edition also introduces the brand new ChineeGuZheng II to replace the old ChineeGuZheng; some instruments have bonus content added; all instruments have the presets remade to utilize the features of QIN engine. As the result, Chinee Series QIN Edition delivers a much better expressiveness and playability than before.

“We have made something that we are very proud of,” said Dongsheng Shan, the CEO of Kong Audio and the producer of the Chinee Series QIN Edition. “Even though QIN is still a work in progress which has many flaws, it has allowed us to finally create the actually playable – in an authentic sense – Chinese instruments the way we had in mind when we first started.” 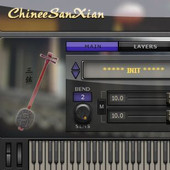 Kong Audio has also announced the release of ChineeSanXian: “The Banjo from the East”.

SanXian (literally means “3 strings”) can be traced back to Qin dynasty, 3rd century B.C. It is mostly known to the West thorough its Japanese decedent, samisen. SanXian’s sound character is a bit similar to Banjo.

SanXian comes in a several sizes, the big SanXian can be a tough challenge for short musicians. Even though SanXian has always been a vital component in the Chinese music, in modern times people inclined to learn other instruments over it for various reasons.

SanXian is still widely used in all kinds of folk musical acts and performances everywhere. Nowadays in the Shanghai area, a revived form of performance, PingTan, is usually performed as a duet of a PiPa and a SanXian. Appreciating this kind of local forms of musical performances characterizes that China is, once again, embracing her own historical music tradition.

ChineeSanXian captures and recreates SanXian faithfully and is powered by the new Windows native QIN engine.

ChineeSanXian is available to purchase for $60 USD.

Normally the price tag for ChineeGuZheng II is 60 USD. And now, with just 20 USD, composers can access one of the best GuZheng instruments available, and have the characteristic Chinese element at disposal.