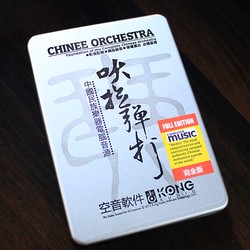 Kong Audio has announced the immediate availability of the boxed version of its Chinee Orchestra virtual instrument collection, and the release of QIN RV 2.10 engine update, as well as the updates for all Chinee Series individual instruments for Windows.

This major update puts focus on improving the legato expressions of various instruments, hence the soundbanks have been redesigned to work with the new Legato II Extender module. Now the instruments are more nuanced and expressive.

Chinee Orchestra contains 22 classic Chinese instruments covering the instruments of the modern day Chinese orchestra, powered by QIN RV engine player developed by Kong Audio. Chinee Orchestra is the de facto tool of choice for the Chinese professionals in China, and also an inspiration for the composers if the world.

Both the QIN RV engine player and the instrument updates are free for all existing customers.

Kong Audio is offering a time-limited launch offer for the Chinee Orchestra Box.

The metal box includes a DVD disc and printed English/Japanese installation guides. Customers can also get the download version while waiting the box to arrive.