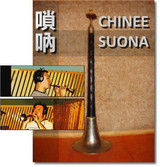 Kong Audio has announced the release of ChineeSuona, a virtual hybrid crossover of a brass and woodwind instrument.

The sound of Suona is energetic, unapologetically harsh, abrasively brash, and proud-to-be-so-loud, blasting out everythings in sight. It is wild.

Suona is believed to be derived from the Persian Zurna and slowly adopted by the Chinese in the course of history. By the time of the Ming Dynasty (14th – 17th century), Suona is documented as a prevalent instrument in China.

Today, Suona is still widely used in the local (especially the rural areas) Chinese activities such as weddings or religious festivals. Some modified versions of Suona are now the official instruments of large traditional Chinese orchestras.

ChineeSuona is available to purchase as a VST instrument plug-in for Windows PC, priced at $68 USD.

Mini-review: SoundsDivine The Joy Of Sound