Korg has announced the Taktile and Triton Taktile, two small, lightweight USB/MIDI controller keyboards that provide a wide variety of functions for song production, and are available in either 25 or 49-key variations (semi-weighted). 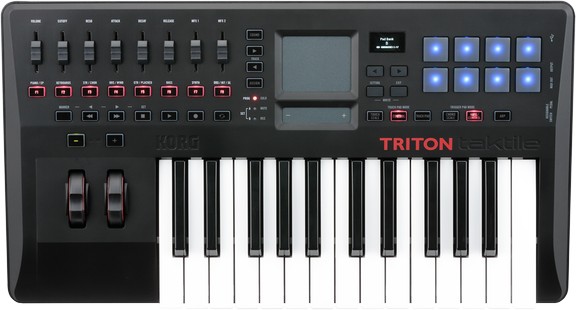 TRITON taktile controller feature a stylish design that projects a sense of presence, together with the same great-feeling semi-weighted keyboard that’s used on synthesizers and music workstations such as the KingKORG and KROME.

It’s loaded with functions that make it fun to play and use, such as a touch pad inherited from the Kaossilator that lets you play melodies using just a single finger, trigger pads that let you generate chords in the key and scale of your choice and an arpeggiator that includes rhythm patterns. Of course, the taktile and TRITON taktile also delivers the functionality that you expect from a MIDI controller. It provides all of the basic controllers such as sliders and switches, and makes setup easy so you can start producing music right away. Convenience is not the only attraction of TRITON taktile; it’s a MIDI controller that’s full of features that will stimulate your creativity.

In addition, the TRITON taktile adds 512 sounds from the TRITON, KORG’s best-selling music workstation loved by top-ranking musicians around the world. From your desktop to live stage performances, it’s a USB MIDI controller that you can use in any situation.