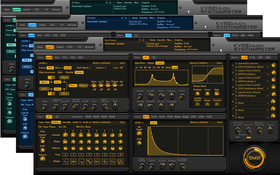 KV331 Audio has announced the beta release of version 2.5 of SynthMaster, a semi-modular synthesizer and effect plug-in.

With version 2.5, SynthMaster becomes a cross-platform plug-in running on Windows and Mac OSX operating systems in VST and AU formats.

SynthMaster 2.5 Beta is available to purchase as a download at the introductory beta price of $70 USD exclusively at KV331 Audio website until November 1, 2010 (regular price $99 USD). Academic licensing is also available for students, teachers and academics for $49 USD ($35 USD until November 1).