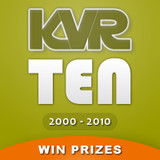 KVR Audio has announced it is celebrating its 10th anniversary with a Year-Long Giveaway.

In February 2010 KVR Audio is celebrating 10 years as the number one news and information resource for audio plug-ins! To mark this special occasion we are having a huge giveaway contest for the whole year (until the end of Jan 2011)! Every month we’ll give away a prize from a major software developer, gear manufacturer or educational institution.

All you have to do is fill out our quick survey once and you will be entered into the prize draw with the chance to win one of the prizes every month! Simple.

We’ve teamed up several leading software, hardware and sample library developers to bring you a fantastic selection of prizes – with a value of more than $8000! A big thank you to these companies for being so generous (with more still to come)!