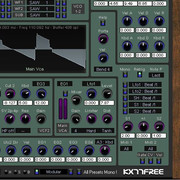 KX-SYNTH-X16 is a vintage modular polyphonic synthesizer, based on the VCS3 structure.

Kx-Modulad to v2.3 and KX-SYNTH-X16 for Windows (VST) are available as freeware.