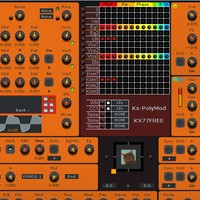 Kx-PolyMod for Windows (VST) is available to download at no cost.