Laptoprockers have announced the DAMNDOGS Remix Contest, a chance to win prizes and get your remix released on vinyl. 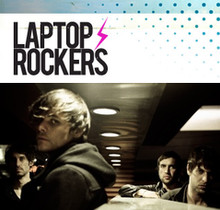 Australian indie dance act DAMNDOGS are looking for FIVE remixes to be released on vinyl.

Chris Cester and Mark Wilson already made name & fame as members of the Australian rock outfit Jet, but have taken a different direction with their new DAMNDOGS project. Completed by longtime friends Mitch McIvor and Louis Macklin, the band doesn’t produce rock music à la Jet, but a unique style of their own that’s been dubbed “doom disco”. DAMNDOGS are bound to tear up dance floors worldwide and they want you to be part of it!

With 5 songs to choose from, this is another big contest for you to join here at Laptoprockers! Remix any of the supplied DAMNDOGS songs to enter the contest.

We have teamed up with iZotope, FXpansion and Sugar Bytes to fill the prize pool for this remix contest with some very nice plug-ins worth well over $850.

Stems to a new DAMNDOGS song will be available every other week at Laptoprockers. The contest closes October 27, three weeks after the last song has been posted.