Line 6 has introduced the MIDI Mobilizer II, its latest portable MIDI interface that connects all classic and modern MIDI equipment to Apple® iPhone® and iPad®. 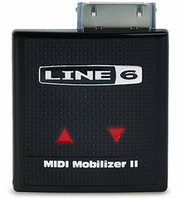 “MIDI Mobilizer II makes portable music production easy,” remarked Chris Grigg, Line 6 mobile products manager. “Anyone with an iPhone or iPad and a MIDI controller can connect MIDI Mobilizer II and be recording and playing music in seconds. And with new apps being developed all the time, users can access an incredibly wide variety of instruments, software and more.”

MIDI Mobilizer II is compatible with CoreMIDI, the new standard for iOS music apps. This allows users to connect their MIDI gear to the latest crop of music apps like GarageBand for iPad and many other exciting music creation and education apps from developers all over the world.

MIDI Mobilizer II is available to purchase for a suggested retail price of $69.99 USD.