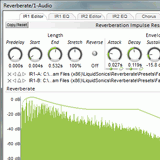 LiquidSonics has released version 1.410 of Reverberate, a convolution reverb effect plug-in for Windows and Mac.

Reverberate is available to purchase for PC and Mac (VST/AU/RTAS beta), priced at £30 GBP.