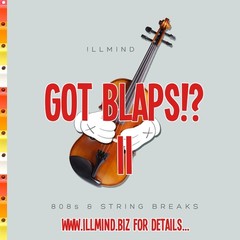 So you think you got BLAPS? Prove it! PRODUCERS, enter my exclusive “GOT BLAPS!? 2” contest by simply doing the following:

Prizes include a limited edition !llmind “ASR-10” USB DRIVE (Contains: BLAP KIT VOL 1 – 3 + unreleased drum kits & sound fonts, !llmind’s ENTIRE catalag of songs produced + released since 2002, and additional surprise material, free 1 hour online video consultation with !llmind, all future “Blap Kits” and !llmind Sound Banks released in 2013, the opportunity to submit up to 10 beats to !llmind, to be constructively critiqued with detailed advice from !llmind himself, and first priority on a slot to perform in a future B.L.A.P. Showcase in NYC in 2013.