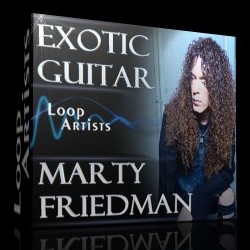 LoopArtists has announced the release of Exotic Guitar, a loop library by guitarist by Marty Friedman.

Producers and DJ’s are often looking for new sounds that add a live feeling to their music. “Exotic Guitar” is a new loop library option for adding that live guitar sound to a variety of genres. The loops were recorded by guitarist Marty Friedman and showcase his signature style of playing ranging from high gain leads and rhythm to clean tone guitar melodies influenced by Japanese and Middle Eastern scales. The audio demo reveals Friedman’s guitar over a variation of metal and dubstep drums hinting at unique remix possibilities.

Friedman is best known for his unique style of playing heard on his solo albums and the time spent as lead guitarist for metal band Megadeth. A total of 65 patterns varying in length were recorded and looped at 140 BPM. Musicians and DJs looking to add a live feel of guitar to their music should look into this loop pack.