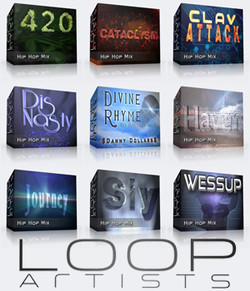 LoopArtists has announced the release of 8 new hip-hop mix packs and a hip-hop vocals loop pack.

Hip Hop emcees are always looking for new beats to lay their vocals on but beats can often be expensive and sometimes not as exclusive as the buyer may think. LoopArtists has released 8 new hip hop mix packs from 2 new producers “Divine Sound Productions” and “Matreyix”.

These mix packs are essentially ready-made beats that have been broken down into loops and allow more flexibility in crafting the final sound. The packs are also a much more affordable alternative to buying ready-made beats.