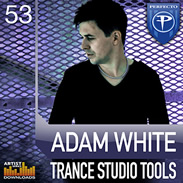 Loopmasters has released Adam White – Trance Studio Tools, a new sample library by Adam White of Perfecto Records, one of the best known and respected labels in Dance Music history.

Perfecto was founded by record producer and DJ Paul Oakenfold in 1989. Since then Perfecto has released singles and albums from such artists as BT, Tilt, Robert Vadney, Timo Maas and Carl Cox. It has also released mix albums from Sandra Collins, Seb Fontaine, DJ Skribble, and Oakenfold himself.

Trance Studio Tools from Adam White weighs in at a mighty 1GB and includes 463 24 Bit Samples, including 174 loops between 120 and 138bpm, plus 289 Single Shot Samples. 80 Midi Files are also included along with 43 Ready to play patches for soft synths including Reason NNXt, Halion, Kontakt, EXS and SFZ compatible samplers. There is also Reason Refill, Ableton Live and Apple Loop versions available to purchase separately.