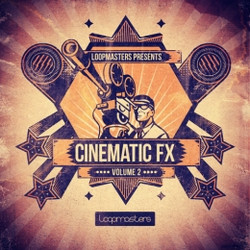 Producer Steven Tunnicliffe raises the bar for the return of Cinematic FX with more incredible sound design tools for producers worldwide looking to add big budget sound effects to their sonic arsenal. Volume 2 comes loaded with almost 1Hour 30 Minutes of pristine 24Bit audio, exploring the many sounds that have you clinging to the edge of your seat as featured in all major Hollywood films.

The Cinematic FX collections are a goldmine for cutting edge underground producers and will be especially useful in productions of Dubstep, Drum and Bass, Electro as well being an incredible source of sounds for anyone creating Cinematic experimental music and Film Scores