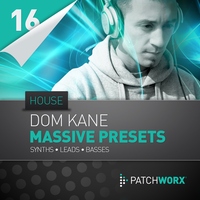 Patchworx 16 – House Synths is a collection of Arpeggios, House Basses, Leads and Pads exclusively created by Dom Kane, one of the more active producers in the Tech House scene right now.

The name Dom Kane appears in studios and DJ sets all around the world. As producer, his tracks have appeared in the playlists of DJ’s such as Pete Tong, David Guetta, James Zabiela, Andi Durrant, Deadmau5, and many more. As a DJ, he’s been a resident at some of the worlds most legendary clubs including Space Ibiza and Ministry Of Sound in London. As a sound-designer and engineer, the name Dom Kane appears in most electronic recording studios across the globe, having delivered work for Loopmasters, FXpansion (D-CAM & Geist), Deadmau5 and Steve Duda (Nerve/Xfer), Ohm Force (Ohmicide), and even factory content for the legendary analogue synth company Moog.

The 64 Massive Patches included in this pack are comprised of 2 Arpeggios, 34 Bass Presets, 24 House Lead Sounds, 4 Pads – plus 64 MIDI Files.