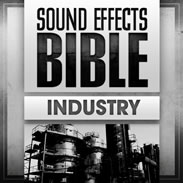 This is a collection of common hand tools, power tools, industrial machines and just about everything in between!

The Sound Effects Bible collection is a special series by author and sound designer Ric Viers and his team at the Detroit Chop Shop. Ric Viers has worked in the film and television industry for more than fifteen years. His location sound credits include hundreds of productions for nearly every major television network, Universal Studios, Dateline, Good Morning America, Disney, and many others. Known as the ‘Rock and Roll Professor of Sound, Viers has hosted several video series like ‘Rode University’, ‘Rode Rage’ and ‘The Detroit Chop Shop Video Diaries’.

The Industry sample library is available to purchase for £42.95 GBP.