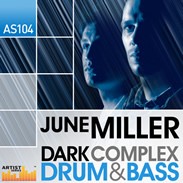 This inspirational sample pack traverses effortlessly from dark and nasty to intelligent with breathtaking cinematic backdrops that tie it all together.

Making waves across the North Sea from London to Holland, June Miller aka Mark McCann and Bart van Dijk pride themselves on their open-minded approach to music. After many inspiring years of travelling across Europe with bands, playing, writing and performing the music they love, they were drawn to the hypnotic sounds of drum and bass. And so in 2007, June Miller was born.

June Miller’s first steps were in fact giant leaps and their talent was immediately recognised in 2007 when they were voted best up and coming act at the Dutch DNB Awards. Their creative flair, along with the diversity and depth of their sound, has caught the attention of a range of labels across the spectrum of drum and bass, as well as dubstep. This effortless precision towards production immediately caught the attention of Loxy, who signed them to his timeless label, Cylon. This was followed by signings from forward-thinking labels such as Horizons, Deep Soul Music, Renegade Hardware and InnerActive.