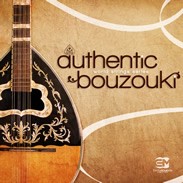 From the same family as mandolin and lute, the teardrop shaped bouzouki’s history dates back to antiquity, evolving from a six-string instrument to eight strings in the latter half of the 20th century. The front of the body is flat and is typically inlaid with mother-of pearl designs. Played with a plectrum, the bouzouki has a sharp metallic sound.

For this signature Bouzuki bundle, EarthMoments sampled and recorded a young prodigy from a traditional Greek family, whose playing has distinct influences of contemporary music styles.

While the soundscape carries a strong classical signature, the sets of both traditional and contemporary phrases gives you the flexibility to easily incorporate the samples into your compositions.