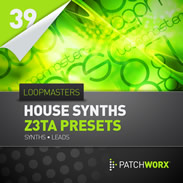 If you use the Z3TA synth from Cakewalk and make any style of House or Dance music – then you will find this collection priceless as it contains some of the most useful House sounds, Leads, Basses and FX alongside supporting Midi files to ensure your creative juices are flowing instantly!

The name Dom Kane appears in studios and DJ sets all around the world. As producer, his tracks have appeared in the playlists of DJ’s such as Pete Tong, David Guetta, James Zabiela, Andi Durrant, Deadmau5, and many more. As a DJ, he’s been a resident at some of the worlds most legendary clubs including Space Ibiza and Ministry Of Sound in London. As a sound-designer and engineer, the name Dom Kane appears in most electronic recording studios across the globe, having delivered work for Loopmasters, FXpansion (D-CAM & Geist), Deadmau5 and Steve Duda (Nerve/Xfer), Ohm Force (Ohmicide), and even factory content for the legendary analogue synth company Moog.In detail producers should expect to find here a great selection of patches which are designed to complement Tech Funk productions, but will of course work well for other styles also.

The soundset is available to purchase for £9.95 GBP.