Loopmasters has released A.S.C – Experimental Drum & Bass, the latest Drum and Bass sample pack in its artist series, presented by the ever popular and in demand ASC. 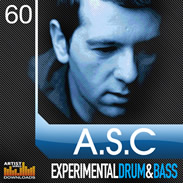 Growing up in different areas of England, on a steady diet of Motown, Techno & the blossoming UK Hardcore scene, ASC’s productions manage to encompass a wide range of these influences. With his first batch of tracks signed to Nu Directions and LTJ Bukem’s Good Looking Records, ASC moved to start his own label Covert Operations which released more than 30 releases on Vinyl and CD.

Since then ASC has released with labels such as 720 Degrees, Offshore, and Paradox’s Outsider label.2010 has seen the release of Nothing Is Certain, to great critical acclaim. If this wasn’t enough to keep ASC busy, September 2010 saw the release of a project entitled ‘Music For Pictures’.

A.S.C – Experimental Drum & Bass is available to purchase in various formats for £29.95 GBP.