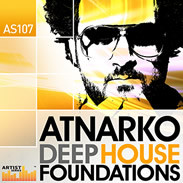 Loopmasters has released Atnarko Deep House Foundations, a sample collection laden with 800 MB of the hottest most wanted sounds from the Deep House scene today.

Produced exclusive for Loopmasters, Deep House Foundations sees Atnarko draw from his dedicated years in the Dance music scene, and puts his much admired studio equipment through its paces creating the perfect Deep House sample collection with hints of the Old School blending with the exciting sound of the Nu School, handing you his trade mark sound.

The spotlight has been shining brightly on Atnarko since he began DJing in Orlando during the early-’90s. Though he was initially influenced by Electro and Industrial, it was the hedonistic allure of House that eventually set the controls of Atnarko’s future. After producing few Breaks-oriented tracks for esteemed labels Astralwerks and DB Records, he fully embraced house’s sensual rhythms and never looked back.

The sample library costs £24.95 GBP. It is currently on sale at 25% off as part of the Loopmasters Holiday sale.