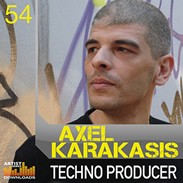 Axel Karakasis has released music on Mb Elektronics, Pornographic, Rhythm Convert, and Omega Audio Recordings, together with his partner in crime for many years Spiros Kaloumenos.

Axel continues to release his music on some of the world’s top record labels, like Intec Records (Carl Cox’s own imprint!) and Primate Recordings, while his tracks are played by some of the best Dj’s around the globe.

Axel has worked hard to put together a fresh and exciting collection of “Groove Based” exclusive Techno sounds and samples for producers looking for a new sound to inject inspiration into their productions.

Axel Karakasis – Techno Producer is available to purchase for £24.95 GBP.