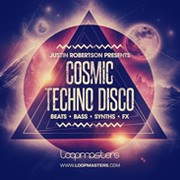 “I’ve crafted a package of outer space sounds and loops, that I hope you’ll all dig!

In this sample pack i’ve gone for a wider variety of bpms , there is something for those who want to create a slow n chunky cosmic sound, as well as plenty for the more uptempo techno/disco heads. The sound sources are also varied from the real live drum sounds, to the deeply synthetic machine funk loops, i’ve tried to gather together sounds that are trippy and timeless, so you can reference the old school whilst creating music for the future!”