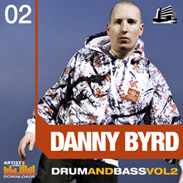 One of the very first artists to sign to Hospital Records – way back at the turn of the millennium, Danny Byrd’s own inimitable take on soulful, vocal Drum and Bass has become a staple in the scene. His use of house and R&B influences immediately began turning heads with his first Hospital singles Do it Again and Changes. Then, later that year, when Radio One’s Fabio championed Danny’s remix of London Elektricity’s Wishing Well, his status as a soulful DnB heavy-weight was confirmed. It’s always been about quality rather than quantity with Danny Byrd with remixes for High Contrast and contributions to our “Weapons of Mass Creation” albums making up his select output.

2008 saw the launch of Danny’s long awaited debut LP Supersized, featuring the massive anthems Shock Out and Weird Science this giant of album has already seen support from big hitters such as Annie Mac, Zane Lowe, and the mighty Andy C.