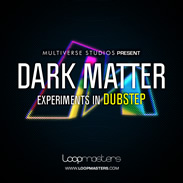 Loopmasters has released Dark Matter – Experiments in Dubstep, a contemporary collection of the finest royalty free Dubstep Samples in collaboration with Multiverse Studios.

Since James Ginzburg founded Multiverse studios the roster of labels, producers and composers has grown to include seminal releases from artists such as Pinch, 2562, Vex’d, Skream, Loefah, Joker and Tectonic (their flagship Dubstep label), and is now widely recognised as having played a significant role in the Dubstep genres worldwide growth and success.

Loopmasters managed to enlist the services of Ginz, Pinch, Moving Ninja and Skinnz from Multiverse to combine forces on this project and present a Dark and Tearing collection of Deep and Rhythmic Beats, Basslines and Textures for modern Dubstep producers to sample.

Dark Matter – Experiments in Dubstep is available to purchase in various formats for £24.95 GBP.