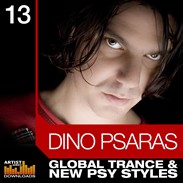 Dino Psaras has come a long way since he first DJ’d at the age of 15 at an Acid House Party, and it wasn’t long before he was playing with the likes of Carl Cox, Sasha and Digweed around the South coast of England. After spending the early nineties DJ’ing alongside luminaries such as Mr C, Todd Terry, Tony Humphries, Paul Oakenfold and Mark Moore, Dino travelled to India where he discovered Psychedelic Trance – a catalyst for change in his musical direction.

From this point onwards Dino has become one of the worlds premier Trance DJs and his Musical CV includes only the biggest DJs, Labels, Parties and Festivals in the Global Trance scene. He continues to tour globally and release records under his own name, with the Krome Angels, Cydonia and under various other pseudonyms.

Dino’s Global Trance and Psy Styles Sample Pack in conjunction with Loopmasters brings all of his knowledge and production experience to the table, and goes further to bring all Trance influenced producers worldwide a truly unique and unprecedented collection of the finest sounds and samples from Dino’s collection.

Dino Psaras – Global Trance and Psy Styles is available for purchase in various formats for £24.95 GBP.