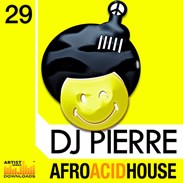 You probably don’t remember 1987. If you do, then you might have hazy memories of wearing aviator sunglasses, big leather jackets and fingerless gloves.

But away from the mainstream the first seeds of acid house were being sowed by four house music lovers in Chicago: DJ Pierre, Marshall Jefferson, Spanky and Herb Jackson. Together, under their alias Phuture, they created the world’s first acid house record called ‘Acid Tracks’, an 11 minute 17 seconds-long house trip based around a sound that has become synonymous with electronic music ever since, the bassline of the Roland TB-303 synthesizer.

Besides being a crucial DJ and the production wizard partly responsible for the development of Chicago acid-house, DJ Pierre later influenced the sound of New York’s more disco-fied house with his tenure as an in-house producer for Strictly Rhythm Records.

Now Loopmasters have teamed up with the godfather of Acid House himself to bring you a collection of inspiring sounds and samples from the very machines that created the genre which brought the UK and USA closer together through a love of Acid House music.