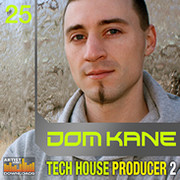 Dom Kane is a star across many musical venues. From releasing his smash hit sample pack at Loopmasters last fall (Dom Kane Tech House Producer Vol. 1) to remixing for Global Underground to patch designing for Deadmau5 and Steve Duda (XFER) and dozens of other undertakings in between.

With this follow-up release to his first, highly successful sample pack, Dom Kane brings you another set of pumped-up robo-funk and Tech House loops and samples. This sample library features a healthy set of bass loops, drum loops (divided into folders “With Kick” and “Without Kick”) and synth loops. The whole loops department is complemented with a nasty set of sampler patches for the most popular soft samplers on the market – EXS24, HALion, Kontakt, NNXT & SFZ. The main sample pack also features a whopping 320+ REX2 loops ready to drop into your favorite sequencer.