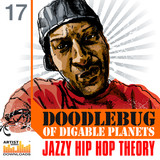 For the first time ever Doodlebug from the legendary Grammy award winning Hip-Hop group Digable Planets is proud to share with you their freshest jazzed out Hip Hop samples from some of the most talented musicians in Philly and New York City, exclusively for Loopmasters.

Cee Know the Doodlebug along with drummer/engineer Gary Dann have put together a group of experienced musicians that have played with doodlebug on live performances and studio sessions throughout his long career in the music industry from the days of the Digable planets to the formation of his recent solo project The Cosmic Funk Orchestra.

If you are looking for true live played Jazz and Hip Hop samples for your productions from one of the founders of the positive Hip Hop movement of the 1990’s then this is one rare, fully pimped collection of royalty free samples destined for head nodders and cosmic musical evangelists across the globe looking to make future classics and retro chic productions.