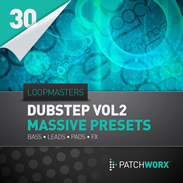 Loopmasters has released Dubstep Synths Vol.2 – Massive Presets by Re-Zone, a new title in the Patchworx series of soundsets.

The soundset is available to purchase for £14.95 GBP.