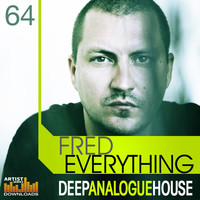 The growing momentum of his releases also brought a lot of remix requests. As a remixer, Fred was able to put his touch not only to house pioneers such as Mood 2 Swing, Dennis Ferrer, Derrick Carter, Kings of Tomorrow, Robert Owens and Roy Davis but also new school sensations like Switch, Kaskade as well as cross over artists: Corrine Bailey Ray, N’Dea Davenport, and the late great Curtis Mayfield.

Fred Everything – Deep Analogue House is available to purchase for £24.95 GBP.